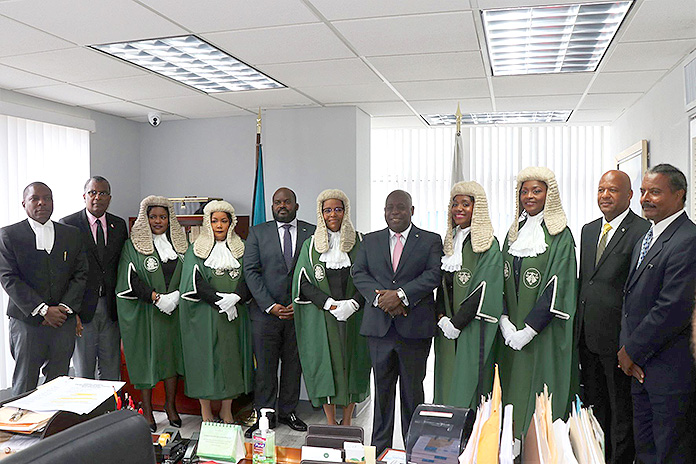 NASSAU, The Bahamas — Prime Minister and Minister of Finance the Hon. Philip Davis said, on November 21, 2022, that when the Government amended the provisions of the Industrial Relations Act to establish the Bahamas Industrial Tribunal in 1996, it was envisioned that the new system to resolve trade disputes in a fair, cost-effective and timely manner would “transform the industrial relations environment in The Bahamas”.

“The original goal of the Tribunal was to expeditiously hear, inquire into and investigate every dispute which is before it, and all matters affecting the merits of such dispute on behalf of the employer or employee concerned,” he said, during the Official Opening Ceremony of the Legal Year of the Industrial Tribunal, held on the 2nd Floor of the Saffrey Square Complex, on the corner of East Street and Bank Lane.

“Yes, for more than two decades, despite the efforts of many, the fight for speedy resolution of trade disputes for the working people of the Bahamas has been slowed, delayed and – in some cases – denied,”  Prime Minister Davis added.

He noted that, as they all celebrated another milestone in the life of the Tribunal that morning with “this historic opening”, he was aware of the significant strides that had been made by President, Her Honour Indira Demeritte-Francis, and the entire the Management Team of the Tribunal, to improve efficiency and productivity in the trade dispute mechanisms for The Bahamas.

“From the implementation of Smart Courts, case management protocols, the utilization of mediation, and other alternative dispute techniques to reduce the backlog of cases, has enabled the President and Vice-Presidents to address many of the ills that were associated with the Tribunal,” Prime Minister Davis noted.

“Your efforts, Madam President, are considered trailblazing.  The achievements of the Tribunal have been recognized throughout the Caribbean Region, and have been an inspiration and some source of pride for The Bahamas.”

Prime Minister Davis pointed out that most people were not aware that, in the height of the COVID19 pandemic, when many of the services of the Government were unable to function in a normal manner, the Tribunal was able to operate using the Smart Court and, subsequently, disposed of over 65% of the disputes it received during the period.

“That is innovation in action, Madam President, and for this the Government and indeed the People of the Bahamas are extremely grateful and appreciative,” he stated.

One of the fundamental matters contained in the Policy, he said, was the enactment of legislation to cause the Tribunal to, among other issues, enforce its decisions and judgements.

“My Government is of the opinion that this new legislation will forever transform the industrial-relations environment and level the playing for the working people of The Bahamas,” Prime Minister Davis said.

“I am pleased to advise the public that after extensive consultation with the national, regional and international stakeholders, the Executive of the National Tripartite Council has drafted the Industrial Court Bill 2022 and presented it to the Minister of Labour and Immigration for review,” he added.

“I can also announce that the National Tripartite Council has subsequently initiated an additional period of pubic consultation with national stakeholders, and it is expected that a formal presentation on the draft legislation will be presented to the Cabinet for consideration and approval, and, consequently, tabled for debate and enactment by Parliament.”

Prime Minister Davis noted that that enactment, along with the review of the terms and conditions of employment for the entire management and staff of the Tribunal will, in his Government’s view, facilitate a stable industrial relations climate in The Bahamas and lead to increase productivity at a national level, and cause the economy to grow “from strength to strength”.

“Madam President, creative and innovative systems utilized by the staff of the Tribunal to bring fair and cost resolution to trade dispute is an indication of your commitment to efficiency in our labour market,” Prime Minister Davis stated.

“I wish to challenge you and your team to expand these creative ideas to other islands in our commonwealth,” he added.  “As our economy grows and our citizens in other islands find gainful employment outside of New Providence and Grand Bahama, trade disputes will naturally increase and, as such, the Tribunal must be responsive and ensure that the dispute resolution protocols are available to these persons in an efficient and cost effect manner.”

Prime Minister Davis expressed his thanks and appreciation to the “many employers that have support the President and management team of the Tribunal in the execution of their duties and responsibilities”.

“The spirit of Social Partnership is alive and well in The Bahamas, and we salute and commend the employers that make that special effort to resolve trade disputes in a fair and amicable manner,” he said.

Prime Minister Davis noted that the tradition of the Industrial Tribunal Opening Ceremony for its legal year, afforded all present the opportunity to reflect on the importance of the institution to society and national development.

“I am confident that all workers and undeniably all citizens and residents that have reason to come before the Tribunal are satisfied with impartially and the efficiency of the trade dispute resolution system,” Prime Minister Davis said.

He added: “For the avoidance of any doubt, I wish to assure each of you that my government is committed to improving the system of justice as it relates to the Working People of The Bahamas; and we will work together with our partners and all stakeholders to ensure that the Industrial Tribunal delivers service with excellence to all citizens and residents of the Commonwealth of The Bahamas.”