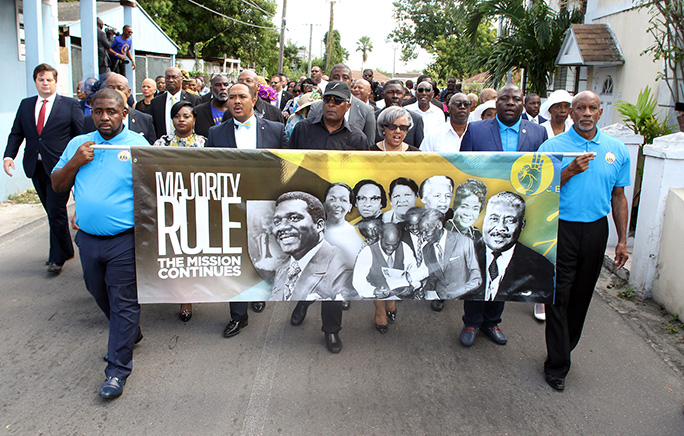 Nassau, The Bahamas – During his remarks at the 56th Majority Rule Day observance, on January 10, 2023, Prime Minister and Minister of Finance the Hon. Philip Davis, noted that Majority Rule was the singular event in Bahamian history that “undergirds the formation of this modern nation”.

“The right of every Bahamian, to have a single, equal vote, is the bedrock of our democracy,” Prime Minister Davis said, during a ceremony near the mausoleum of Prime Minister the Rt. Hon. Sir Lynden Pindling.  “But it did not come easy or quickly.”

“It was hard fought-for, and hard-won,” he added.  “And yet the principle that the will of the majority should determine who rules the country, was strongly resisted by the governing minority.”

Prime Minister Davis said that, in the years of struggle, “many suffered and much was sacrificed and lost along the way”.

“Today we recognize those stalwart, persevering and striving forebears – like our dear Sir Lynden Pindling – who had the guts and the gumption to throw the power to the people on a fateful day in 1965,” he said.

Prime Minister Davis pointed out that it was on April 27th of that year when he crossed to the Speaker’s table in the House of Assembly, took the mace, the symbol of the government’s power and authority, and declared that it deserved to belong to the people.

“‘The people are outside’, he said – before he flung the 165-year-old mace out of the window,” Prime Minister Davis recounted.  “He was the very definition of progressive.”

“And certainly, those brave men and women who led the Burma Road riots were not afraid,” he added.  “They knew what was fair, they knew their worth, and so they marched.

“And of course, those founding members of the Progressive Liberal party were not afraid – they stood up for the right, and the good.”

Prime Minister Davis said that, that day, those present should “call their names boldly and proudly”.

“Let us also call the names of those staunchly defiant women, like Mary Ingraham, Dame Doris Johnson, and Dame Marguerite Pindling, who refused to ‘know a woman’s place’,” he said.

He added that, for their hard work, perseverance, grit, and determination, The Bahamas was “eternally grateful”.

“This is our inheritance: a legacy of greatness, a heritage of perseverance and tenacity,” Prime Minister Davis said.  “It is ours, ours to own, to pass on, to praise.

Prime Minister said that Bahamians cannot ever be afraid to stand in their power.

“Today, on this 56th anniversary of Majority Rule in the Commonwealth of The Bahamas, let us commit to uphold and advance the vision of the freedom fighters who came before us,” he added.

“Let us celebrate that it is because of them that we stand here today as fully-fledged citizens of this nation, as owners of our own destinies, and the authors of our collective future.”

Prime Minister Davis encouraged Bahamians to renew their resolve to protect its social and economic dignity, and remain steadfast in their commitment to the founding principles of “justice, order, and respect, set down by our foremothers and forefathers”.

“May I say to all of you, Happy Majority Rule Day to you, and may God bless you, and continue to favour the Commonwealth of The Bahamas,” he said.