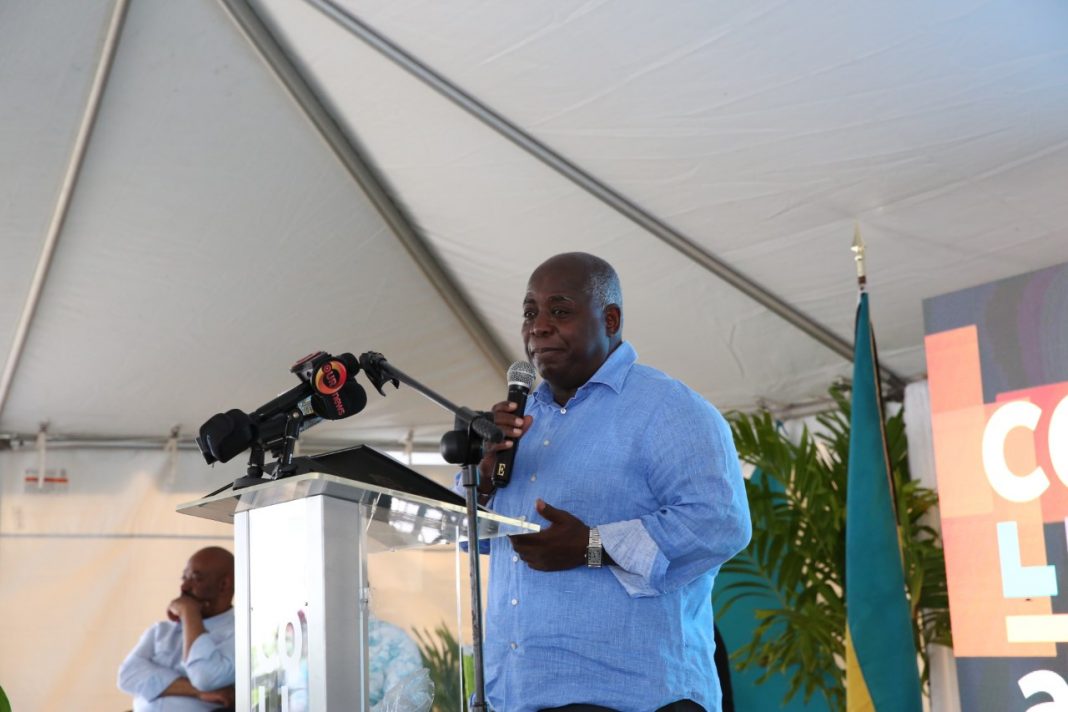 After hearing the glowing reports – in person and during the viewing of a special documentary – Prime Minister Davis announced that the Beautiful Grand Bahama Project, which employed hundreds of Grand Bahamians, will continue throughout the island.

During his keynote address at the ceremony for the opening of Collab headquarters and transition homes and Resource Center on the grounds of Tripp Circle on Saturday, December 17, 2022 — the Prime Minister said it was almost impossible not to continue the Beautiful Grand Bahama program after hearing so many great things about it.

“Until we’re able to have other growth and other projects going, Beautiful Grand Bahama will continue,” said Prime Minister Davis.

“The program will be a feeder program for greater things for you.”

The Beautiful Grand Bahama initiative, founded by Minister for Grand Bahama, the Hon. Ginger Moxey, not only helped to clean up communities around the island, it was also a means by which many unemployed Grand Bahamians were able to regain hope and dignity again, with the opportunity to earn a living once again. The program also taught both men and women various construction skills.

The project which originally ran for three months, then extended for another few weeks, had finally come to an end, but those who had been a part of it, were constantly asking for the program to be restarted.

Needless to say, the Prime Minister’s announcement that the program will continue, brought loud applause, cheers and shouts of adulation during the ceremony in Tripp Circle.

“One of the major initiatives implemented by the Minister for Grand Bahama this year has been the Beautiful Grand Bahama program. It is one of the first initiatives seated under the Collab Unit. This program, as I have heard and seen, has impacted lives, revitalized communities, rescued individuals who felt hopeless, uplifted people who were discouraged and restored the dignity of hundreds of Grand Bahamians.”

Another initiative launched by Minister Moxey to further develop the communities of Grand Bahama was Collab (short for collaboration), which has been designed to bring together the Ministry for Grand Bahama, other government ministries, NGOs and Corporate Grand Bahama to carry out major projects in Grand Bahama.

One of Collab’s first major projects was the restoration of homes in Tripp Circle. The homes, which were once used to house police officers and their families years ago, had been abandoned and fallen into further disrepair as a result of various hurricanes.

During her campaign as a candidate during the last election Minister Moxey had toured the abandoned homes in Tripp Circle and at the time said that something better could have been done with the homes. As the Minister for Grand Bahama, Minister Moxey had decided that the homes could be saved, restored and used as transition homes for families and single mothers who may need a hand up, until they could “get on their feet”.

Workers from Beautiful Grand Bahama played a big role in cleaning up the properties and restoring the homes. In addition to Collab’s office located in the Ministry of Grand Bahama, one of the restored homes at Tripp Circle will be used as a Resource Center.

“My expectation was for the Minister and the Ministry for Grand Bahama to be innovative in its approach in tackling some of the long-standing issues on this island” said Prime Minister Davis. “The Collab model is an innovative approach to public-private partnerships and I believe that this model can be used throughout the Bahamas and we will be modelling throughout the country.”

“The key focus of Collab’s Beautiful Grand Bahama is Bahamian empowerment. It is not simply about providing jobs and entrepreneurial opportunity, it is about transforming lives. I appeal to Corporate Grand Bahama and the NGOs to become a part of Collab to further expand on what can only be seen as a revolutionary initiative that invites true collaboration for development.”

Prime Minister Davis congratulated Minister Moxey on her achievements since being appointed as Minister for Grand Bahama. He expressed confidence in the Beautiful Grand Bahama project and all it has achieved, including a clean-up program that employed so many and a “second-chance” housing project.

“When we took over office in 2021, one of our government’s key priorities was to re-establish the Ministry for Grand Bahama as a full Ministry. We established this Ministry with a new mandate, to partner with NGOs, businesses and other government agencies and the community at large, to assist with the basic needs of residents and for the growth and development of Grand Bahama island.

“As we know, Grand Bahama was seriously impacted by Hurricane Dorian and recovery efforts were further hampered by the economic and social fall out of the Covid 19 Pandemic. Grand Bahama had suffered terribly.

“This is why we deemed it imperative that the Ministry for Grand Bahama be mandated to liaise with other ministries and also to collaborate with the Grand Bahama Port Authority, to work in the best interest of Grand Bahama.

The Prime Minister pointed out that charged with an awesome task of helping to restore, revitalize and revolutionize the economy of Grand Bahama, Minister Moxey decided that the best cause of action was to create a new unit within the Ministry for Grand Bahama.

At the time Minister Moxey asserted that her Ministry’s mission was about partnerships, working together to identify issues, creating viable frameworks and swift implementation for best results.

“I believe that the Ministry for Grand Bahama has found a simple, yet innovative formula to move things forward,” said Prime Minister Davis.

“We are all in this together. We cannot do it alone. My Administration is fully aware that there is much more work to be done and we will continue to work assiduously to resolve the challenges, uplift Bahamians and transform our country.”