FREEPORT, Grand Bahama, The Bahamas – The sale of the Grand Lucayan Hotel is the beginning of the island’s resurgence, said Acting Prime Minister, the Hon. I. Chester Cooper, Minister of Tourism, Investments and Aviation on Wednesday, May 11.

Electra America Hospitality Group has purchased the property for $100 million with principals who have a collective 150 years’ experience in the hospitality industry. The company is also a part of conglomerate with worldwide assets of $7 billion in capital holdings.

The announcement was made during a press conference at the Grand Lucayan where Minister for Grand Bahama the Hon. Ginger Moxey, and chairman of Lucayan Renewal Holdings Ltd., Julian Russell, were present, as well as other members of the Board and senior government officials.

One of the goals of the government is to return the island to a place where the economy is growing. “No plan to revive the financial well-being of Grand Bahama can be crafted without the sale of the Grand Lucayan resort as a key component.”

The previous administration had purchased the hotel for $65 million in August 2018 and the government now subsidizes it with $1.5M per month. The current administration, he said, sought to find a buyer who not only had a vision for the resort but the island as well.

According to DPM Cooper, “Today is the beginning of the renaissance and rebirth of Grand Bahama Island.”

The agreement, he said, is subject to a 60-day due diligence period and closing is expected in no longer than 120 days.

Electra America Hospitality Group has committed to a $300 million renovation and construction plan to rebuild the property into an environmentally sustainable luxury resort. It is expected to be a luxury lifestyle hotel with 200 rooms and 24 villas, an upscale convention hotel with more than 500 rooms that will cater to group and convention markets, an all-suite family resort with more than 200 condo-hotel style suites along with a refurbished golf course with a new country club and golf villas. The casino will be renovated and managed by a world-class casino operator.

Additionally, the new resort will have at least 11 world class restaurants and 10 bars, the resort hotel will have a spa and fitness facility, amenities for children, event spaces, pools and water features.

“We expect this deal to be complete by this summer, at the latest, with renovations and new construction to begin shortly thereafter.

“All renovations and construction are expected to be complete by January 1, 2025,” said the Acting Prime Minister.

This project is also expected to provide several jobs – 2,000 during the construction phase and 1,000 permanent jobs with 80 percent of the jobs going to Bahamians.

With a phased construction plan, the hotel will always remain open.

Live Bahamian talent will be used throughout the property to entertain guests.

He said, “Given the Dorian experience, Lucayan Renewal Holdings Limited has agreed with the buyer to insure the first $10 million of hurricane damage in the event of two named storms making landfall within the first five years of ownership.

“As a part of the purchase price, the company has pledged $5 million to the Ministry for Grand Bahama’s new unit, ‘Collab: Partnerships for Development’ for community projects and funding for Bahamians to create and grow businesses to enhance the tourism product, in conjunction with the Ministry of Tourism and the Tourism Development Corporation.”

The Acting Prime Minister also used the opportunity to state that the government has committed to rebuilding and reopening a world-class airport by 2025, and the process has already begun.

“With the sale,” he said, “we will recoup a significant portion of the investment of the people of The Bahamas, and put Grand Bahama on track to once again be the vibrant entertainment capital of The Bahamas.”

The announcement, he said, signifies “A New Day for Grand Bahama” and “the beginning of the return of the Grand Life to Grand Bahama.”

Principal and Managing Partner of Electra America, Russell Urban, was present for the press conference and said the resort will be successful because of the people’s spirit of hospitality. “So helpful, so friendly, so attentive but mostly and we’re seeing it today, so passionate.  Passionate about country…  passionate about this amazing resort.”

He said they became interested in the resort because they saw a unique opportunity in a world-class location, “to create energy and revive a community that has been so ravaged over recent years. So we are very pleased and humbled to be chosen for this amazing opportunity.

Electra, he said, collaborates with the local communities they are working in and as such, have reached out to several people and this will expand over the next few months as they complete the process. His team will be on island to ask a lot of questions and get to know the people “because it really is about a collaboration,” adding they are excited to be a part of the next chapter of the island.

Minister for Grand Bahama, the Hon. Ginger Moxey, also gave brief remarks stating the day was a “grand day for Grand Bahama.” She said Wednesday was Grand Lucayan, tomorrow (Thursday) will be the groundbreaking ceremony for Carnival Cruise Port, and very soon will be the airport and the new hospital with an oncology center.

“We understood that the people of Grand Bahama have endured much, suffered much, and want to simply see results. In other words, less talk, more action.

“This administration understood the assignment. We needed to deliver the critical needs of the island, rebuild the economy, and do everything in our power to usher in a new day for Grand Bahama Island.”

She said they believe Electra is the best fit for the island, and they have committed to donate the furniture from the property to residents throughout the island and the Ministry for Grand Bahama will lead this charge.

“It warms my heart that Electra gets it,” she said.

The event offers hope for the future and many opportunities for residents, “and finally, the realization for a clear vision for this property to catapult Grand Bahama as a preferred destination of The Bahamas.”

Acting Prime Minister Cooper will also be present for the ground-breaking ceremony for the Carnival Cruise Port on Thursday morning. 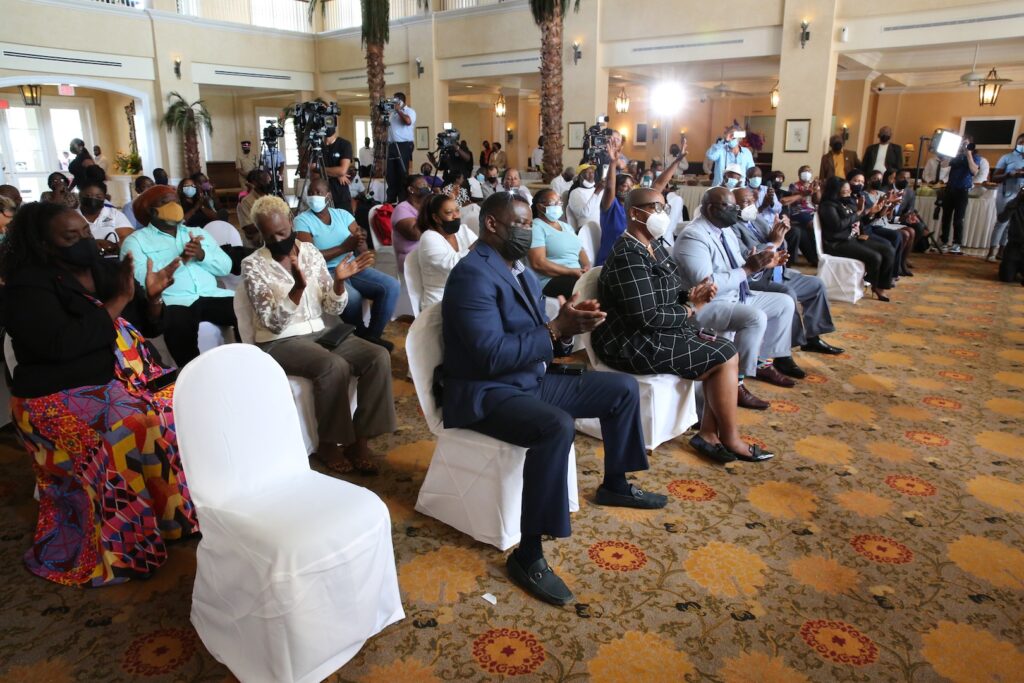 PLEASED – Many senior government officials and members of the public were present at the press conference to announce the winning proposal for the Grand Lucayan, May 11, 2022.  Acting Prime Minister and Deputy Prime Minister, the Hon. I. Chester Cooper announced Electra America Hospitality Group will purchase the property for $100 million. (BIS Photo/Lisa Davis)

END_OF_DOCUMENT_TOKEN_TO_BE_REPLACED

It's time to do this differently