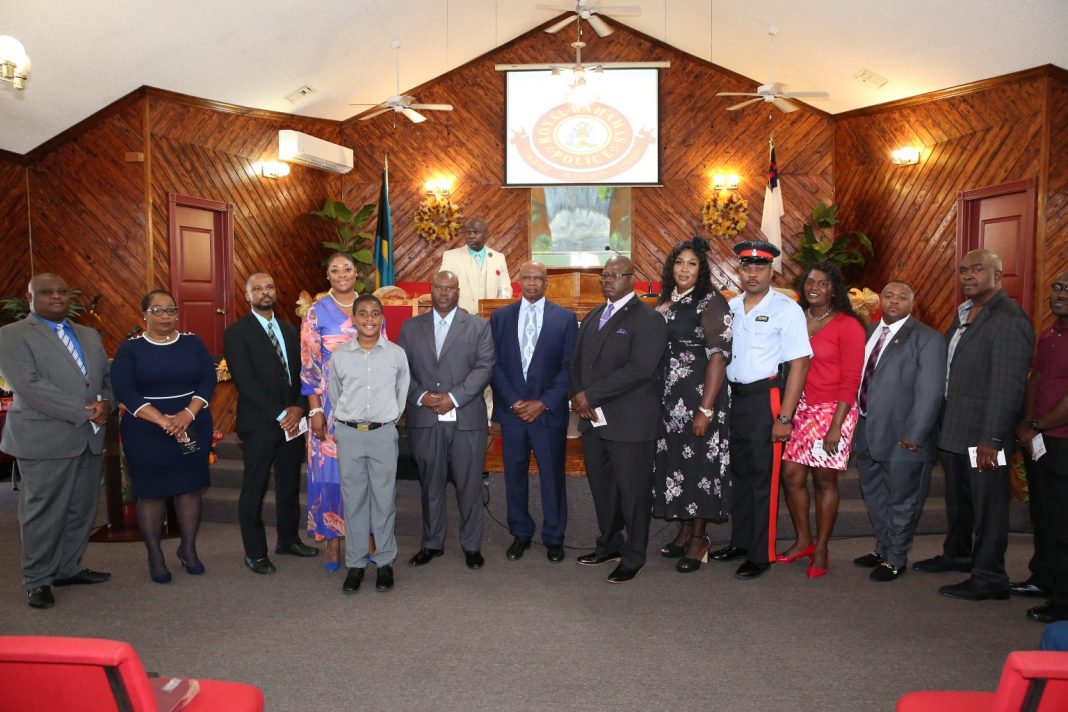 GRAND BAHAMA, The Bahamas — Sixteen Royal Bahamas Police Force Officers in Grand Bahama were honoured on Sunday, November 6, 2022 by members of Tabernacle Baptist Church for their dedicated service throughout the community during a special church service.

The officers were showered with gifts, plaques, poems and words of gratitude and given an extra special treat from the Junior Boys Department as a thank you for their selfless work, acts of kindness and dedicated commitment they display daily.

Senior Pastor Alpheus Woodside said the recognition service was a token of their appreciation for members of the armed force whom, he admits, cannot be paid for what they do. Having served as a firefighter, he has had first-hand knowledge of what it means to go beyond the call of duty to protect and serve the citizens of The Bahamas.

Assistant Pastor Norris Bain Tabernacle said as is customary for the church to recognize a government agency every year, the membership thought it fitting to single out the RBPF this time around.

“We feel like the police officers in Grand Bahama, from the east all the way to the west, do a remarkable job in keeping our island safe. We wish we could have done more for them, but it’s just a small way of us saying thank you to Assistant Commissioner of Police Theophilus Cunningham and his officers. Hopefully this is the first of many that we will do for police officers here on the island,” he said.

Mr. Bain added that it was particularly important to have the younger men of the congregation be involved and to appreciate the role of the police and know that they are there as an ally.

“Whenever we call the police they come. And so we want this relationship between the police and church and community to be a strong one and so for that to happen, the church has to do its part.”

ACP Cunningham, officer in charge of the Northern Bahamas, said it was a proud moment for the officers, both those who were being recognized and their colleagues who were there to show their support as a unified body to celebrate with the church.

“We will continue to be dedicated and loyal to our commitment to police the Commonwealth of The Bahamas without fear, favour, ill-will or malice. We have a sworn oath to protect the country as the gatekeepers of society,” he said.

ACP Cunningham thanked Pastor Woodside and his members on behalf of Commissioner of Police Clayton Fernander, the senior executive police team of the RBPF and the officers of the northern Bahamas.

A prayer covering and protection was also sent up for the officers being recognized and their colleagues.

Inspector Garvin Evans, of the Southwestern Division, has served 23 years on the force was also elated to be recognized by members of the public and pointed out that as police officers, they cannot do it alone.

“The public is our eyes and our ears. We can’t do the job we do without the public. As officers we appreciate the public’s help in any way they can assist us and they’ve been doing that time after time. That’s what makes our job a little bit easier,” he said.